5 Unexpected Benefits of Emotional Storytelling | Gagen MacDonald
Gagen MacDonald has supported research commissioned by the Institute for Public Relations to investigate how PR and corporate communications executives can apply the findings of neuroscience to their work. By understanding key ideas in neuroscience, cognitive behavior and psychology, we can become better storytellers and therefore foster engagement, align culture and drive behavior change. This post will be the first in a series exploring that research. Learn more at our upcoming Storytelling for Business Seminar with the Conference Board.Storytelling is the new buzzword for corporate communications. We know stories can crack open our public image and reveal our inner humanity. They can show our vulnerabilities, our hopes, our pain, our emotional connection to work. They can reveal meaning, build empathy, and inspire. They can be risky. And that’s why storytelling is so effective and a powerful concept to lead change.Yet most corporate communicators still feel compelled to ground their messages – even their most personal stories - in statistics, logical explanations, facts. The emerging field of behavioral communications proves this approach dead wrong.Logic alone cannot spark employee engagement, nor can it persuade someone to make a decision to act. According to research from the University of Virginia, the more people are forced to think logically and justify their preferences, the worse they feel about their choices and more they regret them later. Let’s face it: No one really eats chocolate for the antioxidants. However, as much we want to see ourselves as rational beings, we are feeling creatures first and foremost.Why are emotions more persuasive and effective than logic? Appealing to the emotions doesn’t have to mean sappy messages, either. Humor is an under-exploited emotion in corporate storytelling – and an effective one. After Exelon Corporation and Constellation Energy merged, their technology infrastructure needed updating as well as standardization. The CIO decided to modernize their technology infrastructure to offer new capabilities and benefits to Exelon’s 35,000 employees.Recognizing that most people find technology changes either frustrating or mind-numbing, Exelon asked Gagen MacDonald to help with the rollout. Our approach was to use humor, especially since IT departments often have the reputation of being rigid, unhelpful, or robotic. Humor helped break down any negative feelings employees might have had toward the transition and repositioned IT as approachable group focused on helping employees work smarter. The “IT’s for You” campaign focused on tangible benefits for employees, while acknowledging that the transition may be difficult at times. 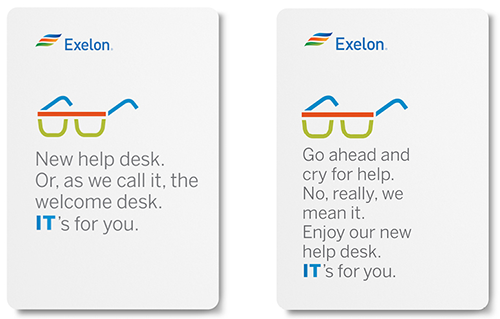 Humor is famously subjective, and it does take guts to crack a joke in a public setting. Here are tips for incorporating it into your corporate communications: Whether you opt for humor or other emotions, practice the discipline of letting the story speak for itself, with its emotional pull intact. Use facts and logic sparingly; they will persuade only a few listeners and distract the rest. Like a great campfire tale, your story needs to light up the darkness with feelings, connecting the circle of listeners in empathy. Logic doesn’t hold that extraordinary power to impress and persuade; only emotion does. 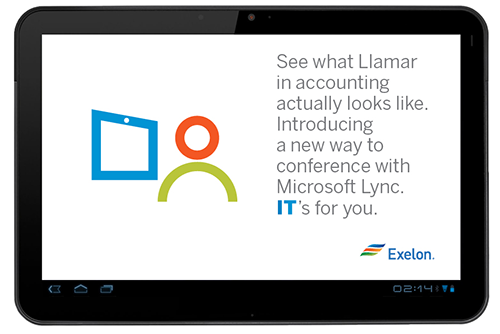 Newsflash: IT Is Actually “The Business”, Too